The hospitals that overcharge patients by 1000%

Try to avoid breaking any limbs in Crestview, Florida. You might wind up in North Okaloosa Medical Center, which charges 12.6 times, or 1,260 percent, more than what it costs the hospital to treat patients.

Where Are the 50 Hospitals With the Highest Markups? 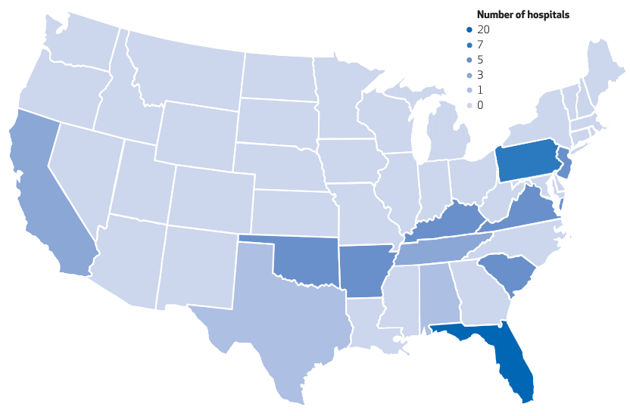 On average, all U.S. hospitals charged patients (or their insurers) 3.4 times what the federal government thinks these procedures cost. “In other words, when the hospital incurs $100 of Medicare-allowable costs, the hospital charges $340,” explain the authors, Ge Bai of Washington and Lee University and Gerard F. Anderson of the Johns Hopkins Bloomberg School of Public Health. The ratio of hospital charges to costs has only increased over time: In 1984, it was just 1.35, but by 2011, it was 3.3.

In the study, the facilities that marked up their prices the most were more likely to be for-profit (as opposed to not-for-profit), urban hospitals that are affiliated with a larger health system. Community Health Systems operates half of the 50 hospitals with the highest markups. The U.S. Justice Department has investigated the Franklin, Tennessee-based hospital chain for the way it bills Medicare and Medicaid. In February, the company and three New Mexico Hospitals agreed to pay $75 million to settle a case in which Community Health Systems was accused of making illegal donations to county governments, which were then used to obtain matching Medicaid payments.

Overall, three-quarters of the hospitals on the highest-markup list are in the South, and 40 percent of them are in Florida.

Only Maryland and West Virginia restrict how much hospitals can charge. The Affordable Care Act makes not-for-profit hospitals offer discounts to uninsured people, but it doesn’t set limitations on bills sent to patients treated at out-of-network or for-profit hospitals.

What Types of Hospitals Have the Highest Markups? 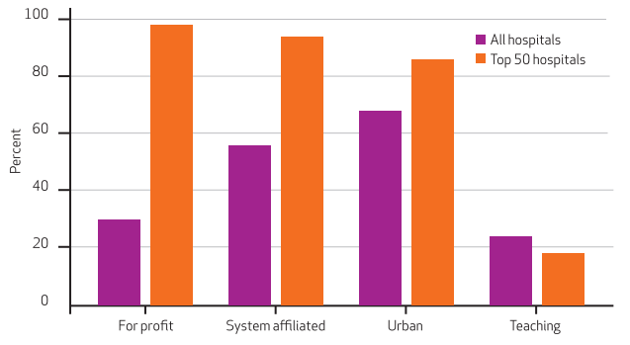 Except for people on Medicaid and Medicare, whom hospitals can only charge a government-regulated amount, these high markups negatively affect almost everyone. They’re bad for privately insured patients who find themselves being treated at out-of-network hospitals. They’re bad for the uninsured, since people with no insurance have no one negotiating on their behalf with hospitals. And they’re bad for anyone who pays insurance premiums, since high hospital prices drive up the cost of health insurance.

“Collectively, this system has the effect of charging the highest prices to the most vulnerable patients and those with the least market power,” the study authors write. It’s how people end up with “exceptionally high medical bills, which often leads to personal bankruptcy or the avoidance of needed medical services.”

The authors say one way to fix this might be to require hospitals to post their markups online so patients can price-compare before they go. But that wouldn’t work for emergencies, for people who live far from all but one hospital, or for the many people for whom hospital charging codes are, very understandably, inscrutable.

Alternatively, legislators could say that hospitals can only charge people a certain amount more than what they would charge Medicare, which usually negotiates some of the lowest rates. Or, more states could do what Maryland, Germany, and Switzerland all do and aggressively limit how much all hospitals can charge, period.

But as the authors note, that last solution would be “subject to considerable political challenges,” which is perhaps a polite way of saying, “will make the Obamacare battle of 2010 seem like a casual game of bridge among friends.”

In the meantime, that drunken jet-ski trip in Florida this summer might be risky for more reasons than one.

Read The Hospitals That Overcharge Patients by 1000% on theatlantic.com